The Hayward Shoreline Interpretive Center opened its doors on Friday, July 11, 1986. This was the culmination of more than a decade of planning. The Hayward Area Shoreline Planning Agency (HASPA) was formed in 1971 to prepare plans and programs for Hayward’s eight miles of San Francisco Bay frontage. Given existing pressures for development, HASPA’s initial responsibility was to evaluate the need for preserving the Shoreline’s open space and natural resources as compared with the need for additional urbanization.

To ensure the consistency of future Shoreline plans, HASPA was established under the provisions of an intergovernmental, joint exercise of powers agreement. Members of HASPA included: East Bay Regional Park District, Hayward Area Recreation and Park District, City of Hayward, Hayward Unified School District and San Lorenzo School District. HASPA produced numerous reports examining the physical, social and economic conditions that established the framework within which decisions could be made about land use. Through their efforts, today, more than 1,800 acres are open for public use and for the protection of wildlife.

Below you will find an article detailing the history and creation of the Interpretive Center, written by Mike Koslosky, our first Program Director. His article reflects on the changes which have happened to the shoreline since it was a hunting and salt industry area in the early 1980s, off limits to the public, and its eventual change to the beautiful habitat which both people and wildlife enjoy today. 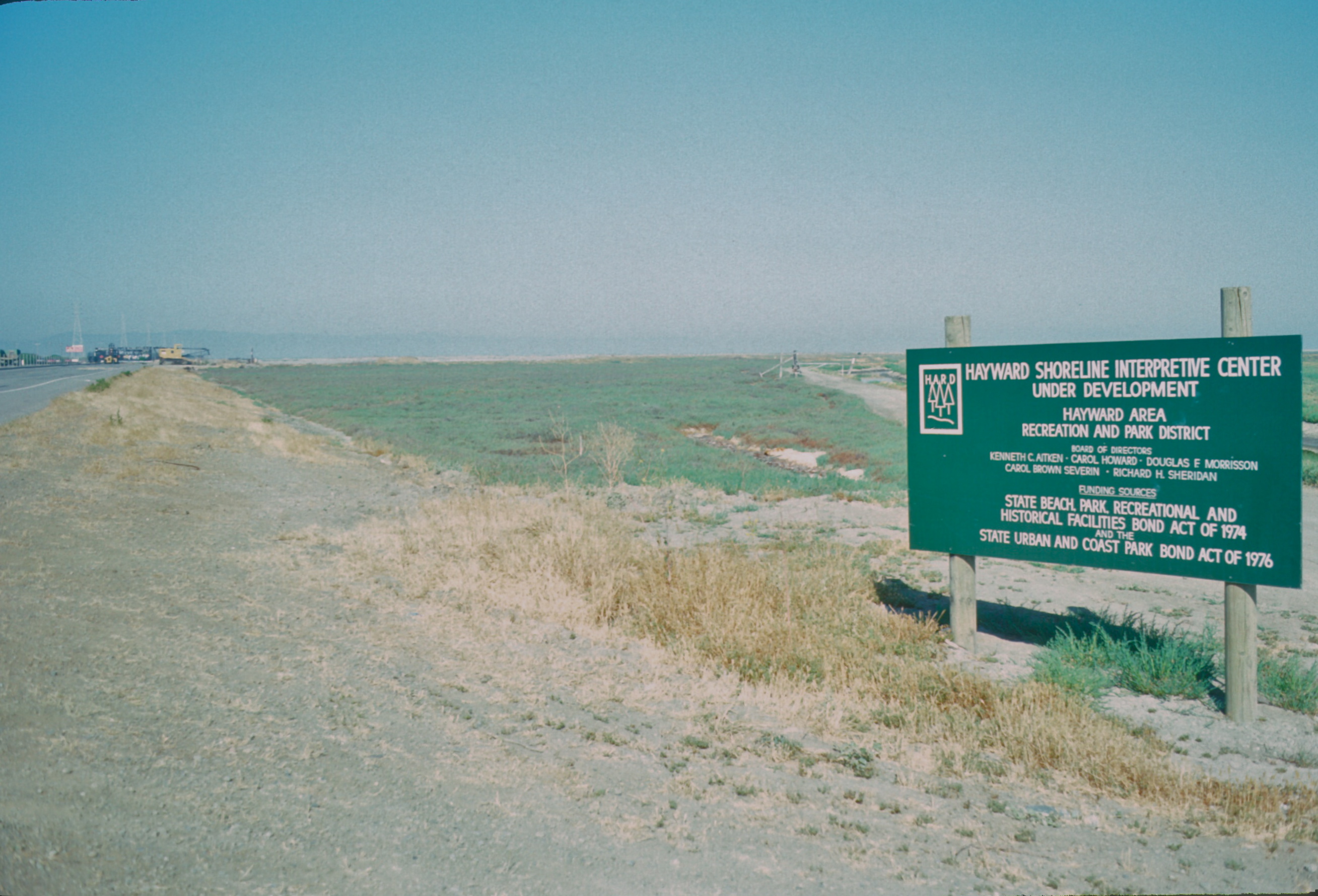 Passages
Mike Koslosky, Supervising Naturalist who was instrumental in the creation of the Interpretive Center, wrote this article for Tidal Tales just before his retirement in 2007.

It was a warm autumn morning back in 1975 when I was first introduced to the Hayward shoreline. My friend Gary, a public works employee, had been bringing dredge spoils from local creek cleaning operations to this disposal site on Oakland Scavenger Co.’s capped landfill at the end of Winton Avenue. Fumaroles of spontaneously combusted garbage leaked to the surface here and there creating an eerie post-apocalyptic scene. I thought they were hobo camps.

I recall Gary mentioning as we scrambled over the rock and glass rubble at Hayward’s Landing how this landscape was full of surprises due to the absence of people and the treasures the daily tides uncovered. Two steps later he reached down and picked up a pair of binoculars, waterproof and perfectly good, flotsam from a weekend sailing adventure. Surprises and treasures, indeed. I was hooked.

Acres of open space, the freshness of the bay breezes and salt air, unusual plants, wildlife at every turn and not a soul in sight. It was paradise on the half shell. Little did I know at the time but this vast bay plain of wildness was not accessible by the public. Land speculators, salt farming companies, and waste disposal operators lay claim to this “wasteland.” Weekends brought kids on dirt bikes roaring over the land. Winter brought crews of duck hunters, their hyperactive Labradors salivating. But essentially the place was unoccupied 90% of the year. 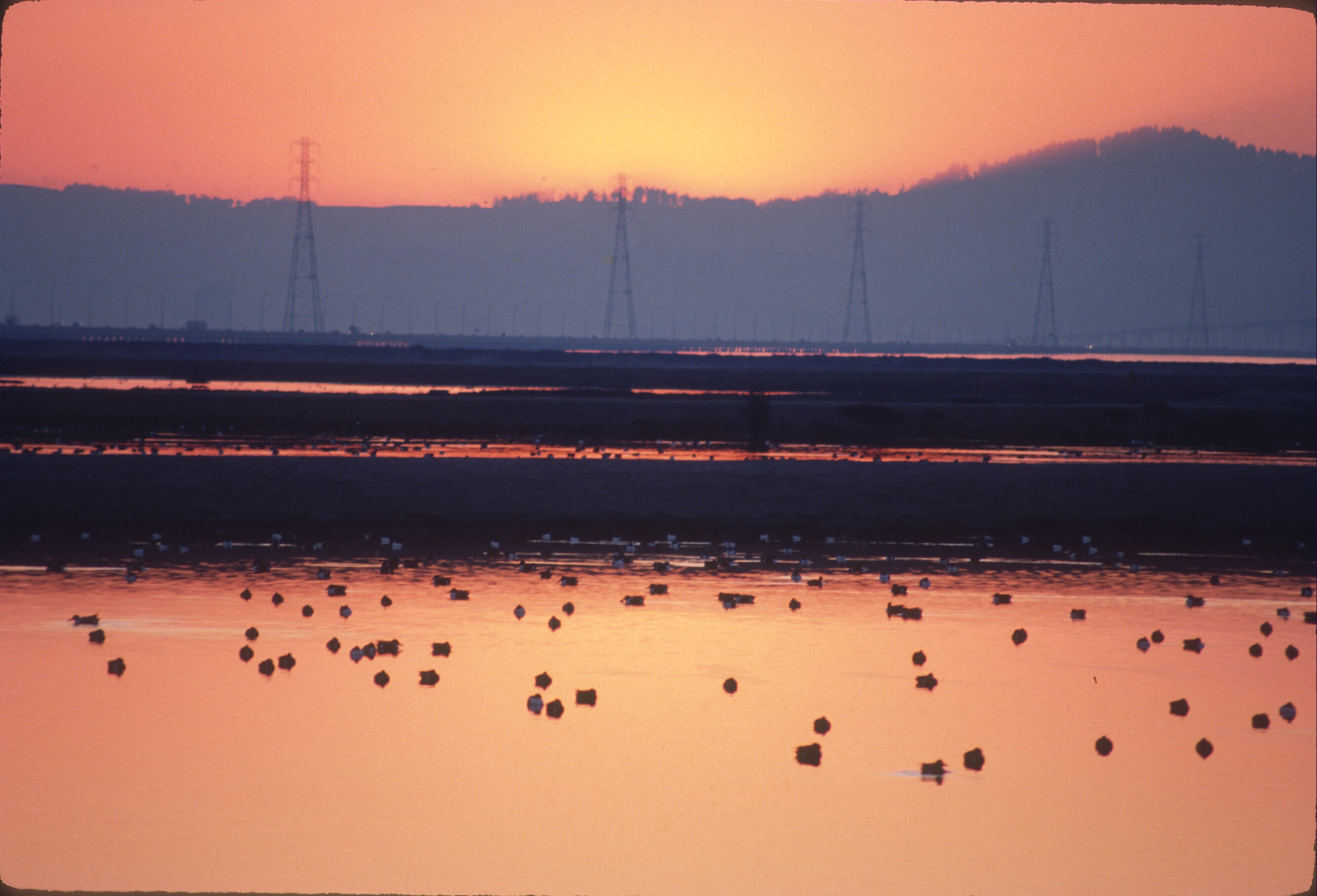 Three miles south of where Gary and I stood was a rundown shack occupied by a security caretaker and his guard dogs overlooking a cattail rimmed freshwater pond.  This habitat seemed strangely out of place just yards from the open bay waters. Must be an underground aquifer being tapped.

But behind the scenes a movement had already been underway.  In 1967 HARD General Manager Bud Critzer had appointed the District’s Citizens Advisory Committee to investigate the possibility of developing recreational activities and facilities along Hayward’s eight-mile shoreline. After several forays into this mysterious land of stinky mudflats and ever present wind, the CAC members felt the task was more than they could handle and recommended a group be established whose sole purpose was to study the shoreline for potential uses.

By 1971 the Hayward Shoreline Planning Agency was formed through the cooperative efforts of HARD, the City of Hayward, Alameda County, and East Bay Regional Park District. This unique joint powers agency was charged with making recommendations for guiding land use plans and to protect general public welfare. Agency staff went to work searching for legal title to these lands, acquiring for funds to purchase land surveying the area to understand its geologic, biologic, and cultural characteristics. To encourage community input a Citizens Advisory Committee was created in 1973 and its incredible synergy was the driving force behind much of the progress we see today.

Thanks to grizzled science teacher and shoreline advocate, Leo Bachle, the HUSD successfully developed a comprehensive Teachers Guide to the Hayward Shoreline including complete lesson plans for all manner of science, art, social studies and language arts field trips for all grade levels. Scores of teachers participated in weekend workshops, planned field trips for their students and explored this area that had been off limits to the public for over one hundred years. Subsequently, workshops on the Hayward Shoreline were presented to the general public involving youth group leaders from throughout the community.

Fall 1977 saw the creation of the Hayward Shoreline Interpretive Center Design Committee. HARD had been awarded $490,000 in Land and Water Conservation Grant funds to build a facility to introduce the public to the wonders of the shoreline and its checkered past.  Interested community members, local college biology professors, Audubon members, educators, agency staff, and naturalists contributed ideas to build something that would achieve the goals of HASPA’s plan for an ecology/education center.

Science teacher Marilyn Gise is credited with sketching the first conceptual plan for the building back in June of 1975 and the committee made improvements and concessions to her initial design until reaching agreement on a great facility perched at the end of the trail overlooking Johnson Landing. It had a studio for a resident intern, a photo lab, boat launch and storage, outdoor stage, community rooms and lab space. Staff offices were situated above the outdoor stage giving million dollar views to Birkenstock-clad, bearded, bird watching naturalists. 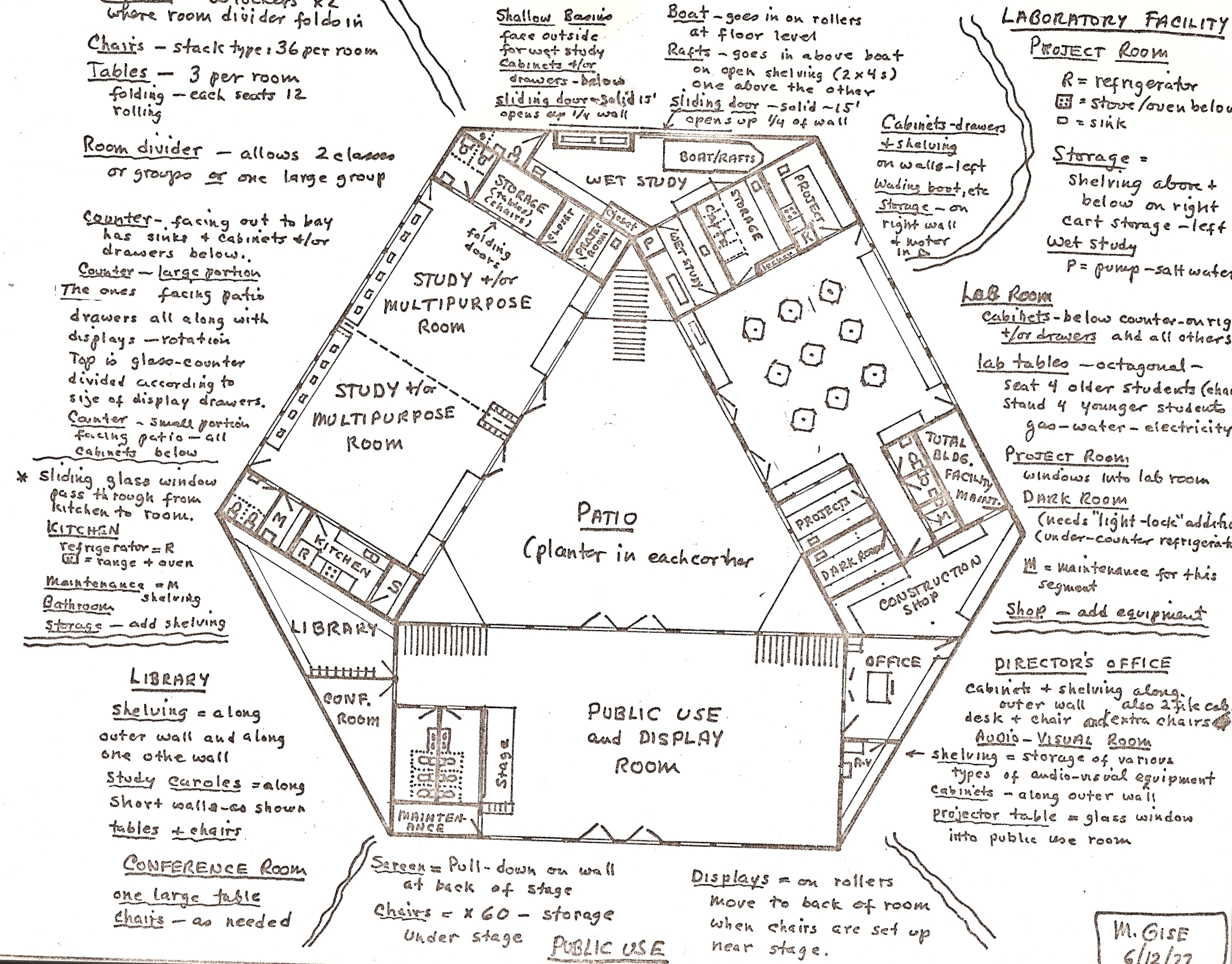 They say the devil is in the details and the day I drove out to the site of the proposed interpretive center and found it underwater was one of those details we overlooked! Some on the committee were relieved actually since the building would be a huge addition to the flat bay plain and could be a problem for migratory waterfowl and shorebirds who had been passing through there unimpeded for generations. Coupled with that was the narrow one lane access road that did not allow turn around space for vehicles, and would have needed nearly a mile of new utility lines for power and servicing. Move it!

And move it we did, to the shoulder of Highway 92. What we gave up in bucolic setting was compensated for in incredible publicity and visibility. Logistically it was a no-brainer; with global warming pressing in on us it was a blessing in disguise. 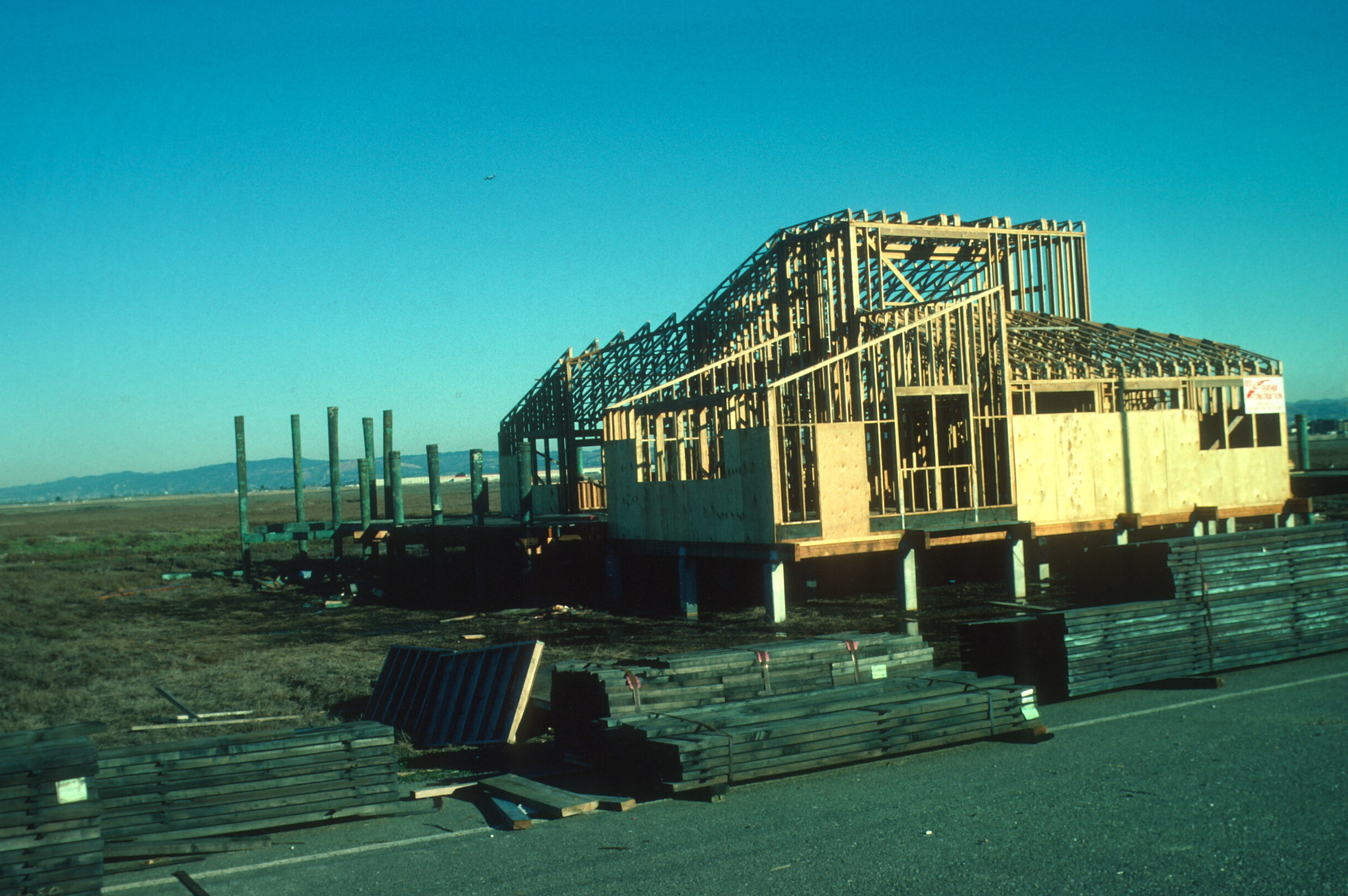 After endless meetings, revisions and compromises the Interpretive Center was built and opened in March 1986. I have to say the success of the facility is due to the fact that we developed the program parameters before the architect went to work. We knew what we wanted to accomplished in the building, how school kids and the public would use it, how it would interface with the environment.  We knew it would work. 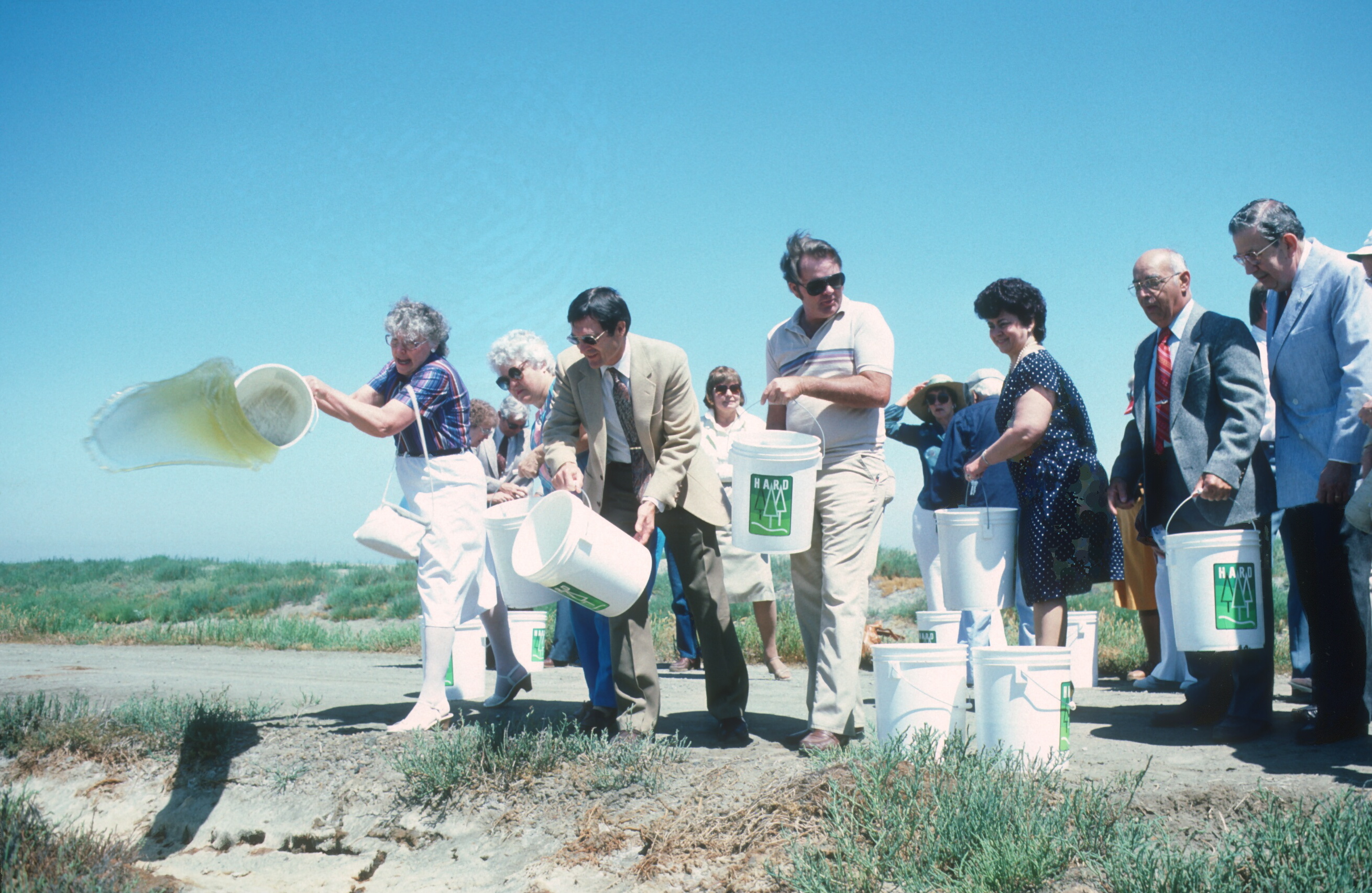 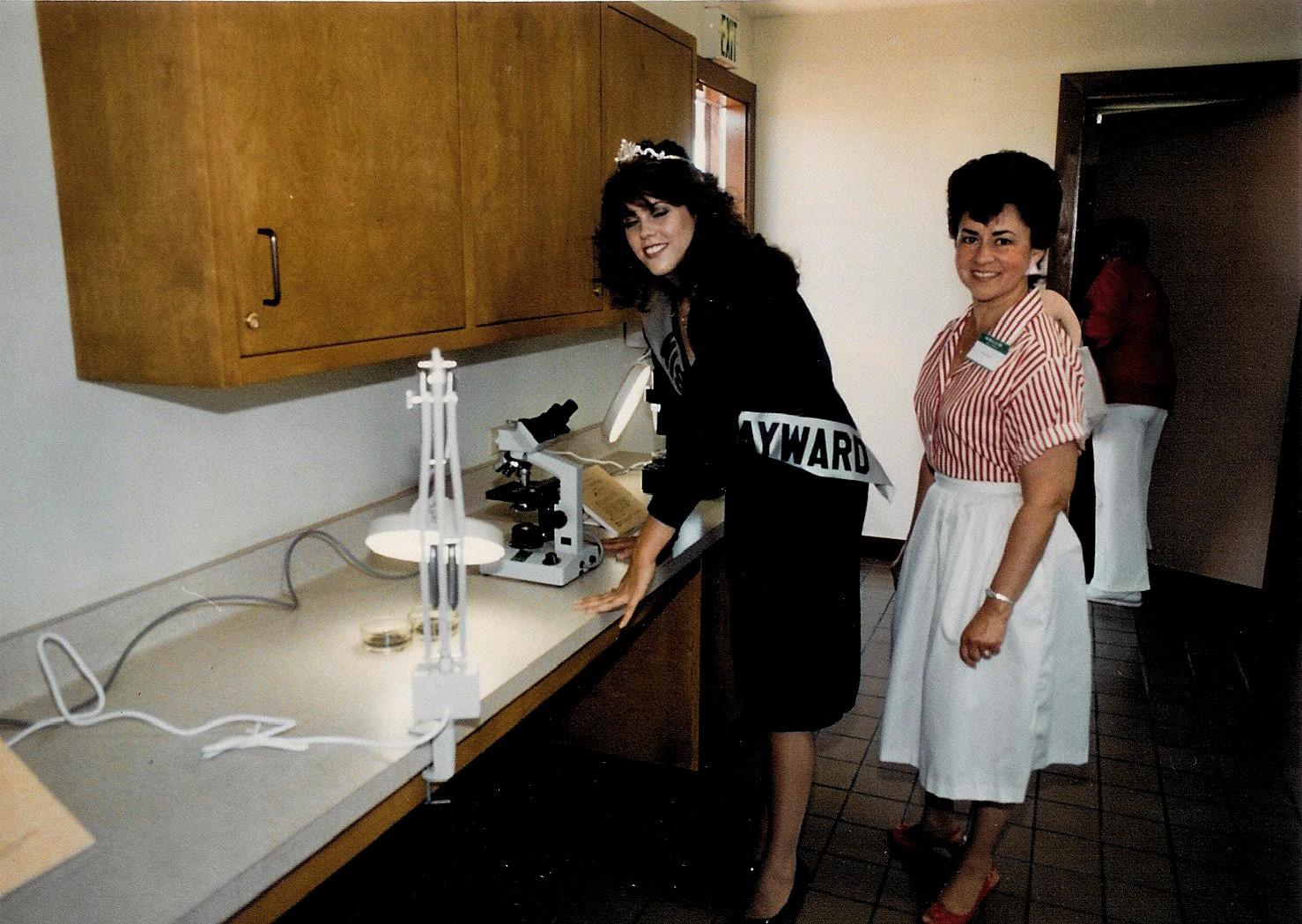 My first school program reminded me of that trip with Gary so many years prior. I was leading a group of twelve sixth grade girls on a trail hike when we happened upon a shark feeding in a shallow basin at the edge of the bay. Everyone was thrilled to see the dorsal fin cutting through the water as the shark searched for clams buried in the mud. As we turned to continue, one of the girls left the group and waded into the pool with the shark. My first reaction was to get her out because there was so much glass and rusted metal she could get injured if she fell. I walked into the water to haul her non-compliant butt to the trail when we both realized the shark was swimming towards us. As it passed between our legs we both reached down and grabbed. Squirming for all it was worth, a three-foot long leopard shark was in our hands! Half the girls on the trail screamed and the other half started humming the Jaws theme song. This place is full of surprises I thought. It’s going to be a great place to work. 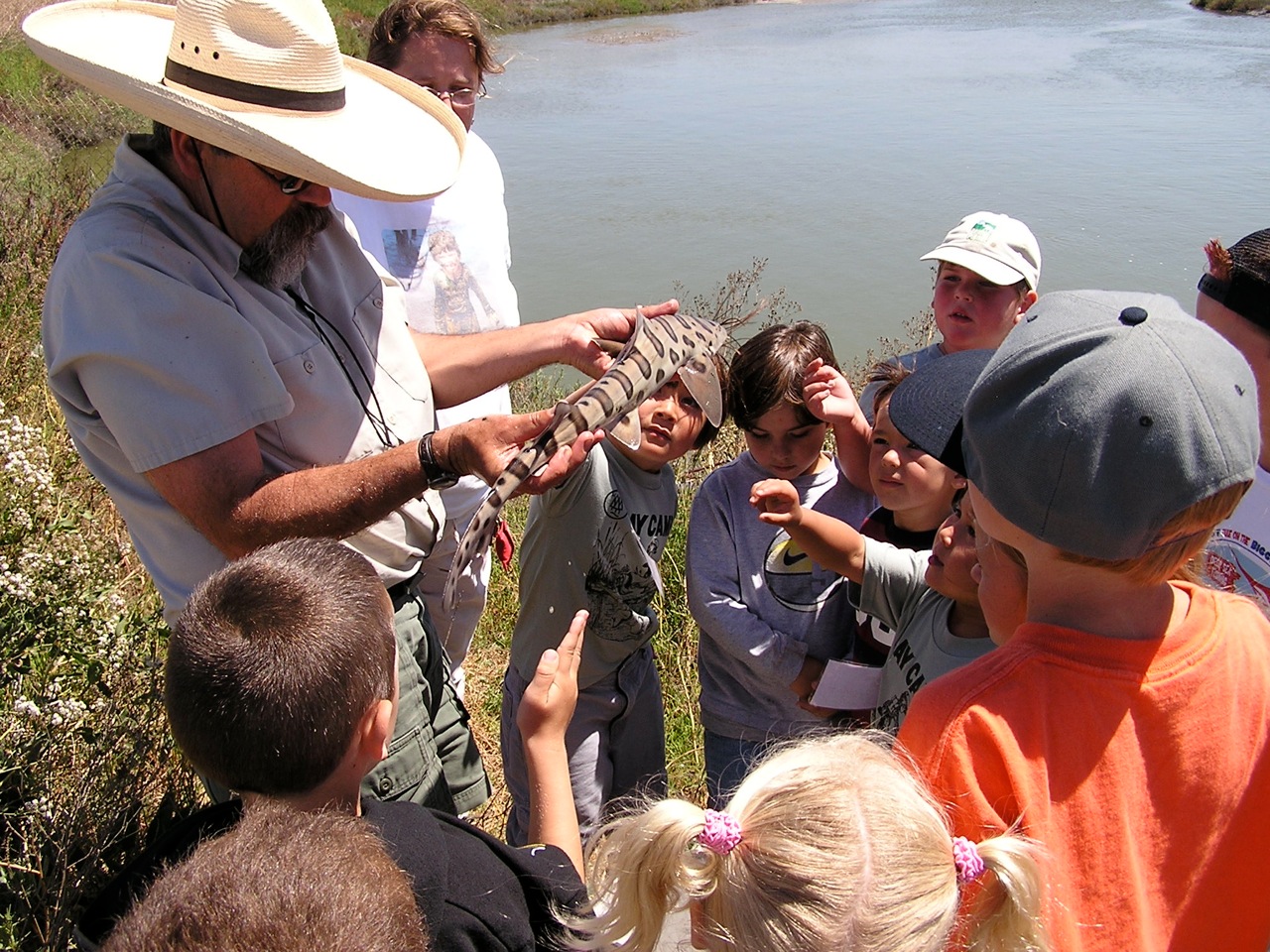 Thirty-two years later much has changed. Through the efforts of the Hayward Area Shoreline Planning Agency public access has been acquired to thousands of acres of shoreline property. Trails lace over seven miles of terrain from Highway 92 to San Leandro. Historic salt marshes, reclaimed for salt farming in the late 1800’s, have been returned to their natural state. Sensitive habitat has been set aside for shorebirds, waterfowl, and the endangered salt marsh harvest mouse. Gold Rush-era salt farming landscapes have been preserved and protected for future generations. An education center has been built to introduce thousands of school children and adults to this unique and valuable natural resource. In the next few years more public access will open the lands south of Highway 92 and someday the Bay Trail will encircle the bay. 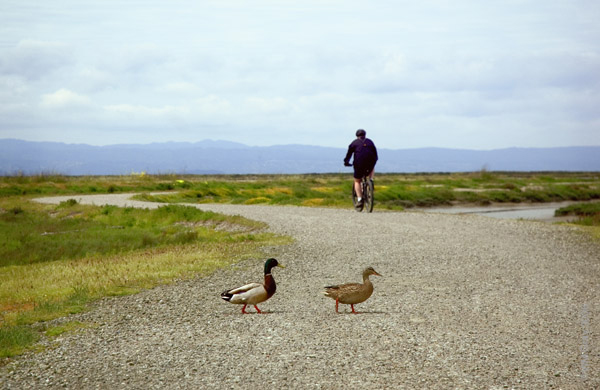